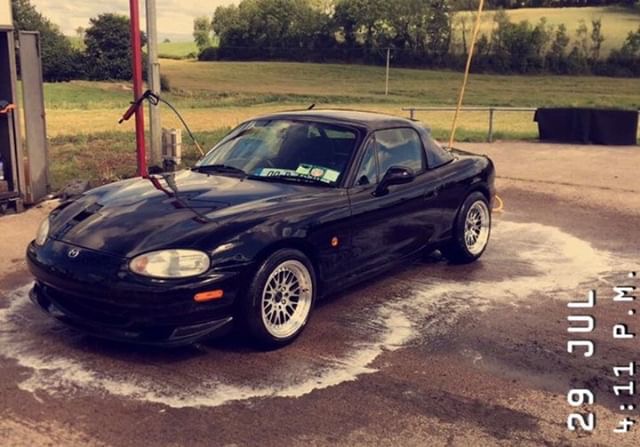 Since I was 15 or 16 I’ve wanted an mx5 as my first car but as many people know, insurance companies don’t allow that! So I actually put the idea of having an mx5 completely out of my head for as long as I could but somehow it always found a way to creep back in. I saved and saved and told myself I’d buy one and work on it until I am old enough to ‘legally’ drive it on the roads! It wasn’t until I was 19 that I seen the perfect Miata, or so I thought! It was a 1.8 mk1 with loads of extras. I got talking to the owner and I arranged to meet him to purchase the car, but after driving for 3 hours down the country to view it, he wouldn’t answer his phone. I eventually give up and decided to start my journey home but on my way home I searched on donedeal and seen a lovely mk2 1.6 so I decided to have a look and that was it, I came home with my new to me, standard 2000 1.6 mx5 with only 40,000 miles on the clock!

This then started my long and expensive journey of fixing up my once dream car! I started off with my alloys, 15” ultralite’s! I thought I’d be happy with that for awhile but before I knew it I had a japstyle roof spoiler and japstyle front lip ordered! I then started going to shows and different things to get ideas and inspiration! Sooner more than later I had a roll bar and an OMP seat and harness in the car! After that I purchased coil overs and put them in but that still wasn’t enough! I purchased a 1.8 competition clutch and flywheel and a 1.8 4/1 torson LSD and rented a slot in my local garage to get it all put in! I took a day off work and I took into putting all my recent purchases on my car! I was so pleased with myself, it was finally coming together! Since then I have now put a MOMO steering wheel and a new strut brace to help with handling! I’m nowhere near finished yet with many many ideas still going through my head!